Book Review for “The Kitchen Daughter” by Jael McHenry. 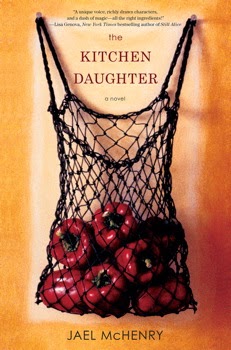 Ginny has Asperger’s, and one of the few things that calms and comforts her during times of stress, is cooking. So when she’s trying to cope with the sudden death of her parents by making one of her grandmother Nonna’s recipes, and Nonna’s ghost appears in the kitchen, she’s not sure what to think. Is she being cursed or has she got a gift? One thing for certain, she can’t tell her sister Amanda, or she’ll certainly have to move in with her and her family. More importantly, what was the message Nonna was trying to tell her, just as she faded away? Whatever it was, Ginny knows one thing – she wants to be left alone to find out and take care of herself, no matter what Amanda thinks.

One of the interesting things about this story is that as the book begins, Ginny doesn’t know she has Asperger’s. Yes, she knows she’s different, but the label has never been used with her. What little I know about the syndrome is what I’ve read in fiction and seen on TV series. From that, I can easily believe that Ginny could be in the dark about this, even at the age of 26, especially because her mother seems to have done so much to help her cope with life and make her feel normal. Of course, this brings up the whole issue of what is really “normal.” Is it confined to only the type of behavior society finds acceptable, or are there gray areas as well? If Ginny can take care of herself, even if she has difficulties with some things, then isn’t that enough? Personally, I think it should be, but her sister doesn’t agree.

McHenry weaves her own version of magical reality into this story, which also complicates the situation. By adding the apparitions of lost loved ones conjured up through Ginny’s cooking, the reader begins to doubt if she is even within the “normal” range. However, Ginny is so immediately sympathetic to the readers that it is easy to disregard the strangeness of these visitations. In fact, we quickly become involved with Ginny’s journey to discover what Nonna was trying to tell her. So we really don’t care if these ghosts are a figment of Ginny’s imagination, some side-effect of her medications, an unusual case of waking dreams or actually real.

This is what impressed me the most about this book. The characters feel alive and their flaws are very human; we want to see them evolve and be witness to that process. We identify with their pains and difficulties, even if we’ve never been in their shoes. We understand their weaknesses and we are willing to forgive them when they make mistakes. And, as the tale unfolds, we also begin to question if our own concept of “normal.” Is it just our own personal version, which others would view as abnormal? If so, then there is no normal at all.

With this beautifully crafted story, McHenry also gives us the delectable recipes that Ginny makes which bring about her ghosts. As we read these passages, we realize that the real point of her cooking is a unique path to discover more about herself. This makes this into a culinary coming-of-age novel like none I’ve ever read before. My only problem with the book is that I felt the ending was slightly rushed and tied things up just a touch too nicely for my taste. For this, I can confidently recommend Jael McHenry’s “The Kitchen Daughter” and give it four out of five stars.

“The Kitchen Daughter” by Jael McHenry is available (via these affiliate links) from Amazon,  Walmart (Kobo) eBook, the website eBooks.com, iTunes (iBook), The Book Depository (free worldwide delivery), new or used from Alibris, used from Better World Books (promoting libraries and world literacy), or an IndieBound store near you. This review was originally published on Curious Book Fans and also appeared on {the now defunct} Yahoo! Contributor Network.